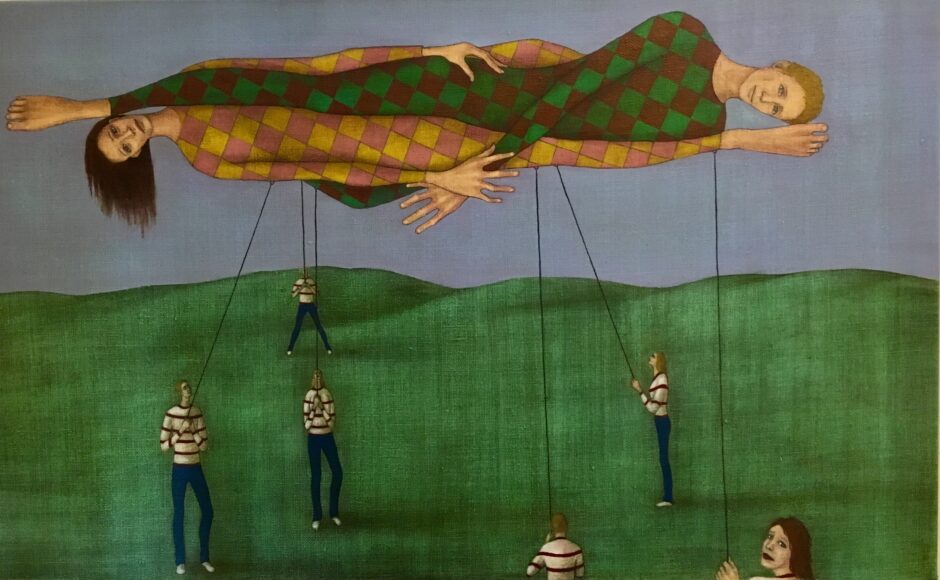 The pictorial narratives of Hugh Fleetwood 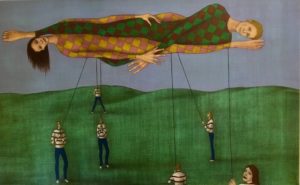 Natural landscapes that come alive from nothing. Forests and meadows as simple backgrounds of a mysterious presence of humans. Persons who become characters, with fixed glances that draw trajectories in the void. They look at each other; they interact remaining alone, reaffirming their identity, their lean and essential humanity. They look like to be in a sort of presence-absence, like a deaf cry, in a state of simplicity that becomes complex but only to return simple.

Animals, and trees and leaves and flowers, that become symbols. An essential composition that is sublime and perfect in its way. 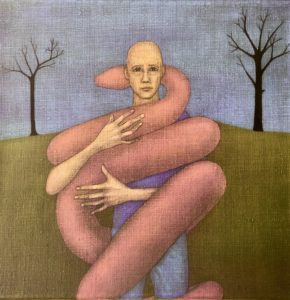 There is an almost Flemish atmosphere in the “visual narratives” of Fleetwood, which involuntarily emerges, and it surprises us. His world is now real, now, suddenly, without any reference to reality, but only connected with our memories. 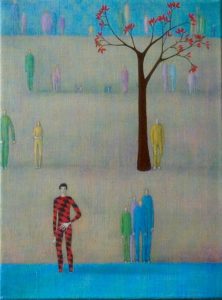 Fleetwood takes us into a suspended world; not a meditative world but only one made by pure admiration. His is not a hedonistic game; it does not chase the nice fairytale and gothic caricatures, nor the contemporary glitter of ‘skulls and diamonds’. 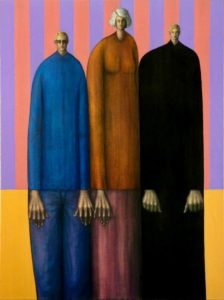 His atmospheres offer a classic style and stories of beauty suspended between life and death, between reality and dream. It is precisely in this dimension that the ‘figurative’ is moving towards a ‘meta-representation’. But without cognitivism, without numbers and without calculation, only with the lightness of poetry, of figures that, just as well as words, make up a simple and touching poem. It is precisely in this poetic gesture that Fleetwood builds his pictorial world, where he entertains himself and he quietly spends the time of his life.

With this suggestive retrospective, Fleetwood seems to invite us to take a walk, without haste, in his delight pictorial garden. 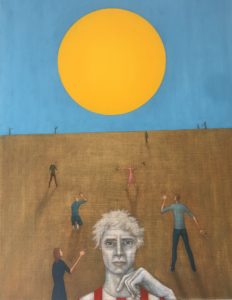 HUGH FLEETWOOD is a painter, poet and prize-winning novelist.

Born in England in 1944, he moved first to France and then to Italy, where he remained for the next fourteen years. He had his first exhibition in 1970 at the Festival dei Due Mondi, in Spoleto; the year after, he published his first novel, A Painter of Flowers, for which he also designed the cover. His second novel, The Girl Who Passed for Normal, won the John Llewellyn Rhys Memorial Prize and his fifth one, The Order of Death, was made into a film – Corrupt in the U.S. – starring Harvey Keitel and John Lydon (Johnny Rotten).

In all he has published twenty-two books and he has been called one of the key authors in the history of the British and Irish short story; set to music, some of his poems have been performed at the Salzburg Festival.

He also designed the cover for his last novel, The Dark Paintings, and for a late publication of one of his earlier books, Foreign Affairs.