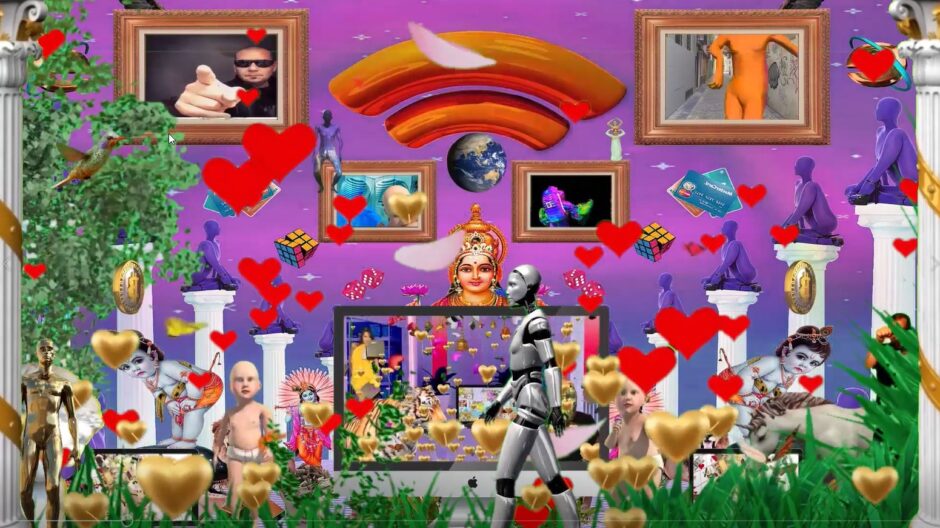 Artist of the multimedia and the networks, Michaël Borras A.K.A Systaime is the founder of the movement French Trash Touch, he is an important actor of the international alternative artistic network, the digital art and the art in network.Michaël Borras works on numerous international artistic events as artist, organizer, speaker, art curator .

In 2011, he is the inspirator and the founder of the Spamm, the Museum of the Super Modern Arts.

Systaime is an artist troll who floods social media with animated gifs, augmented reality collages and politicized glitches. Inventor in 1999 of the “French Trash Touch”, he feeds on iconic saturations of the Internet, multiplies his accounts and identities, posts on Instagram messages gilded with sugary post-porn love, makes acidic music videos for Orties, Asia Argento and Telepopmusic, while DJing and VJing. He works his way into current affairs with his vitriolic remixes of “great men”—his “Silences” series attacks all politicians, from Trump to Putin, leaving nothing but the emptiness of their speeches.  Systaime tracks tech ridicule (the bitcoin craze, which he juxtaposes with personal accomplishment speeches in “Bitcoin Abundance”, 2014) in order to “explore our collective digital unconscious”. Systaime ignores hierarchy, superposes and surimposes, confronting us with our human contradictions trapped by the great digital spider. His exhibitions use mash-ups to physically represent digital proliferation (“Systaime Work !n Progr355”, 2017).  He federates a new generation through online exhibitions in his Super Art Modern Museum (SPAMM), which has an occasional physical showroom in New York (“Cupcake”, 2013), Moscow (“Spamm Of Virtualism”, 2015) and Caracas (“Dulce”, 2013).    In “ H[ÔM]3 ”, Systaime offers explosive mashups of Internet Aesthetics, where information, images and comments provide a frame of today’s Digital Pop culture. The artist remixes web images and uses an audiovisual spectacle to display the patterns that are dominating the Internet, its icons, its manifestations and its digital prosperity. We are the “lucky” spectators of what he chooses to present us. What happens in the video has not much to do with our own lives, but it is more a kind of close esoteric manifestation of this web culture that is part of today’s pop culture.